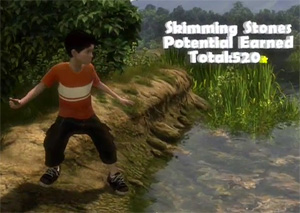 Hi all! As a special seasonal treat for anyone still thinking games during the holidays, I’m posting a pitch document I wrote back in 2009 when Lionhead was hiring an ‘Activity Designer’ for their Milo and Kate game, originally just called Milo. I wanted to show them I had ideas for how you could make a game out of what they already had.

If you don’t know about Milo, it was a sweet tech demo for Project Natal (now Kinect) Peter Molyneux showed at E3 2009. There have been calls of ‘fake!’, and I’m sure the software for the demo was rigged to deal with specific behaviors. But I think Lionhead really was working on the demo/game (and hiring for it), even if it was subsequently cancelled and there were examples of smoke and mirrors being used in the demo. But, here, check out the original presentation in HD for yourself:
END_OF_DOCUMENT_TOKEN_TO_BE_REPLACED