Is there such a thing as a new idea? Or are all creative products ultimately a combination of existing things? When a newly announced videogame was presented via analogy with two existing games, I had to consider how much of a role existing works should play in the creative process.

A while back I was on an email thread discussing the newly announced game by Trion, Atlas Reactor. There was a positive response, and someone commented, “Dota meets XCOM. I’m in.”

Then I read the article discussing the game, at Polygon, “Atlas Reactor is Dota meets XCOM, and it’s fantastic“. Here’s an excerpt delving into the creative process:

The development of Atlas Reactor began with the team asking a single question: Why are competitive games fun?

“There’s two reasons we figured out,” Ju says. “One is improving your raw skills. Any time you’re grinding a combo in Street Fighter or figuring out a better way to last-hit in League of Legends or figuring out better decks in Hearthstone, you feel like you’re getting more mastery of the game.

“But the other thing, what most people generally say when they’re really into a game, the thing they love the most is when they outplay their opponent. It’s when they learn enough about a game’s nuances to know that an opponent is going to move in one direction, so they move in a different direction and outguess them. That high level of play, that’s what’s really fun about a competitive game; you just have to get through all this other stuff to get to that point.”

The fact that the designers started from such a basic question – what does “fun” mean, for a competitive game? – reminded me of something Elon Musk frequently says in interviews. He talks about how real innovation arises from reasoning from first principles, as opposed to reasoning by analogy.

“The normal way that we conduct our lives is we reason by analogy. ‘We’re doing this because it’s like something else that was done.’ or ‘It’s like what other people are doing.’ […] It’s mentally easier to reason by analogy than from first principles. […] First principles […] means you boil things down to fundamental truths […] and then reason up from there. That takes a lot more mental energy.”

And this description sums up the point:

The benefit of “first principles” thinking? It allows you to innovate in clear leaps, rather than building small improvements onto something that already exists. Musk gives an example of the first automobile. While everyone else was trying to improve horse-drawn carriages, someone looked at the fundamentals of transportation and the combustion engine in order to create a car.

Returning to Atlas Reactor, what is interesting about this particular example is that it was presented by Polygon as “Dota meets XCOM” – which is reasoning by analogy, and seemed to fit the resulting game really well and got people excited. Obviously that’s the press analyzing a product after seeing it presented. But the design team claims to have reasoned from first principles – “Why are competitive games fun?” when coming up with the game design. Their creative process stemmed from asking really core questions and then evaluating whether the response to those questions could lead to fun.

In marketing, analogies for creative products happen all the time, because they can trade on your enthusiasm for past positive experiences, giving you a context in which to expect a return on your investment and future creation of more happy memories. Trion takes full advantage of this in their trailer video, with their producer saying:

It’s everything you love about a turn-based game, but it’s competitive. […] there’s no waiting. It’s a team tactics game, with simultaneous turns.

And in case you didn’t get how awesome this is, the video smashes down TEAM TACTICS and SIMULTANEOUS TURNS onto the screen in bold yellow letters, juxtaposing terms you understand to create an analogy you can get behind without knowing much else: 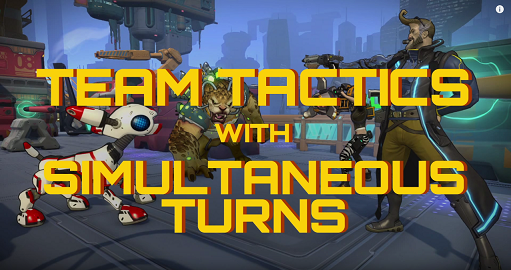 As a consumer, no-one’s really immune from this. Human beings naturally pattern-match new experiences in order to better understand what they’re experiencing. My analogy brain immediately went to Frozen Synapse as a comparable game, although Frozen Synapse does not (to my knowledge) have multiple human players on each opposing team:

Another example comes from the film industry. Critics and analysts develop patterns that seem to fit a work retroactively – for instance, shoehorning movies into the 3-act structure  in almost all “how-to” books like Screenplay by Syd Field.

But useful as these observations are for consumers and critics, as game designers we mustn’t then mistake those analogies as the core foundations of the work. It is a dangerous trap to reason by analogy when creatively designing a product. There is no guarantee that X + Y will = Z, instead of X + Y = 0.5X + 0.5Y (at best).

That’s why, if you’re making a game, a doctrine of “part established mechanics / setting / genre, part innovation” can be problematic. At that point you’re hoping that your initial copycat approach leads you to original ideas, simply through the error-prone but inherently creative act of implementing them. Either that, or hoping that the alchemy of slamming X and Y together, particle accelerator-style, will truly produce something new. The problem is that alchemy historically has a pretty low success rate; alchemy stems from mysticism, not science.

Here’s another example from the world of screenwriting, provided by John August and Craig Mazin in their fantastic podcast Scriptnotes. In Episode 88 they discuss a company that was trying to sell development executives a service to analyse screenplays and tell the studios what to change to make a higher-grossing film, based on statistical script analysis of previous successful films. John explains why this is a bad idea:

John: With data […] you can look for correlations and you don’t necessary need to say that that’s the cause of why this thing was what it was, but if you’re just making arbitrary distinctions, you’re just cherry-picking little things in whatever movies were hits and whatever movies were not hits. And you’re using that to defend what really your decisions are. And that’s not actually using data… That’s just manipulating things.

Craig: If his theory is that, I don’t know, let’s go out on a limb here. I’m going to crunch some quick data here using my statistics program. In romantic comedies, people like it when the couple ends up together. Duh! Okay. We all know. We get it. We got it, okay? That’s called giving notes and that’s what studios always do. […] If you want to be in a business that follows various predictable patterns in order to grind out predictable income, what the hell are you doing in Hollywood anyway? The whole point is to chase things that are surprises. Isn’t that the point?

And that is the point, in videogames as well as film. As much as studios and executives wish that there were a feature or a story setting guaranteed to always produce success, there isn’t. And whether trying to create a new IP or reinvigorate an ailing franchise, executives and designers alike should be aware that including a feature because other successful games have it, or because there’s a sense that it’s now required in the marketplace, or for any other reason than “This feature perfectly complements the game we are designing” is a creative mistake. My thesis is that creative failure leads to commercial failure far often than it leads to commercial success, so you want to avoid creative mistakes in the game you ship.

Analogies help our primate brains to make connections and understand what we’re experiencing. And yes, maybe attempting to reason from first principles whilst being creative might result in more frequent catastrophic failure. There is, after all, usually a reason why given mechanics and genres work the way they do.

Well, catastrophic failure sounds like a bad thing! Failure is scary. But as Astro Teller at Google’s secretive X labs outlines in this episode of TED Radio Hour, failure is something to be celebrated:

Teller: So since 2012, the Loon team has prioritized the work that seems the most difficult and so the most likely to kill their project. […] We work hard at X to make it safe to fail. They get applause from their peers, hugs and high-fives from their manager, me in particular. They get promoted for it. We have bonused every single person on teams that ended their projects, from teams as small as two to teams of more than 30. We believe in dreams at The Moonshot Factory. But enthusiastic skepticism is not the enemy of boundless optimism. It’s optimism’s perfect partner. It unlocks the potential in every idea.

At the very least, investigating your game mechanics at such an atomic level will teach you more about the natural inertia of why things have developed they way they have so far.

But perhaps I’m just inserting too much creative mystery into “product development”.