This is my first post on this blog, and it’s turned into a bit of an essay. But this idea’s been knocking about in my head for a while – so, rest assured, I probably won’t have quite this much to say all the time…

The most memorable moment in the long-running saga of me “finishing” Mass Effect 2 was when I knew I wouldn’t have a fully loyal team before The Big Showdown.

Part of the reason that this was memorable was the undeniably solid build-up to this episode. Tali, a crew-member, needed to go protect her reputation and that of her father on her homeworld. Okay, so that’s her story motivation. Big whoop, right?

But then the game invested me in the outcome, by teaching me that how I dealt with my crew’s personal problems would determine their loyalty to me – a measurable outcome affecting the gameplay, my game abilities and potentially the ending of the game (I don’t know about that yet – I did say me “finishing” the game was a long-running saga).

Character creates plot – then plot is given gameplay significance. This may seem obvious, but lots (maybe most?) games with stories don’t make the story affect the gameplay in any more meaningful way than specifying where it happens, or the initial premise. Without a feedback loop between story and gameplay, why be surprised when gamers don’t invest in the story of your game? You aren’t, and you developed the damn thing.

But I’m getting sidetracked. The point was, the setup made me involved in the scenario.

The next thing Bioware did right was they let me, the player, make a nuanced ethical and political choice. It’s hard to do that in a game, because choices tend to branch your plot, and that gets unruly fast. Plus, choices tend not to be nuanced – they need to make an impact on the player. But Bioware boxed my choice into the Loyalty system, eliminating any branching beyond my interactions with Tali and a flagged gameplay ability. Thus they made my choice important but, by limiting the outcomes, they kept the game on track. 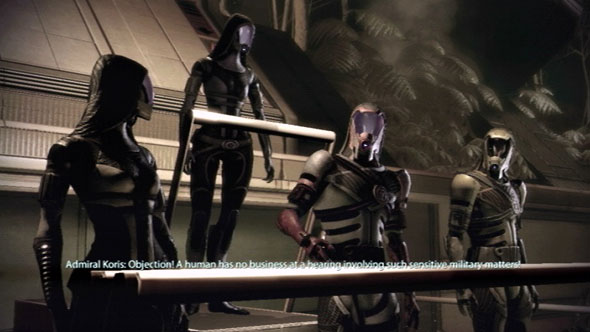 Tali wanted me to lie in a court to protect her dead father’s reputation, allowing her to take the blame and be exiled for treasonous conduct she did not commit. The alternative was to present the evidence against her father, who, with the best of intentions, had been illegally re-assembling dangerous androids in order to perform weapons tests on them. Tali begged me not to tell the court about this, so I was left with a personal choice – heed Tali, let her take the fall and win her loyalty in exchange for obeying her wishes; or ignore Tali, and reveal what her father had been doing in order to clear her own name – without her consent.

Sneakily, there was a third option – using my Paragon or Renegade powers to sway the court with my rhetoric and clear Tali of all charges without implicating her father. For whatever reason, however, I didn’t take that path – I think I had the requisite points, but I must have missed the branch, or, more likely, decided that I preferred a different dialogue option not invested with the same gameplay potency, and said that instead.

Story in conflict with gameplay

So, I said, the hell with what Tali wants – I know what’s best for her. She can’t go living a lie to protect her dead father. Who would that serve? So I revealed the evidence on him, he was roundly condemned, Tali was exonerated, we left the planet and Tali was furious at me. I had lost any hope of gaining her loyalty, even though I had protected her.

Setting aside the circular issues of gender equality in a man deciding what’s best for an (alien) woman, or equally in a woman placing the reputation of a dead man in precedence over her own – which open a fascinating can of worms, but one we’re not examining at present – I want to focus on the outcome for me as a player.

In all significant gameplay terms, I had failed. I would not get her loyalty, I would not come to The Big Showdown with a clean sheet and a roster full of devoted subordinates ready to fling themselves into the fire for the cause. I would not gain access to a new gameplay ability.

So, in a way, the game was punishing me for making my own ethical choice. I had chosen not to worry about the loyalty system (even though I cared), but to do what I felt was right regardless, and hope that Tali would realise I wanted what was best for her and come to her senses. But she didn’t, there was no greater end-game, I couldn’t change the outcome by persuading her, and the chance was lost.

It’s unreasonable for a developer to make you do something like that, right? To let you make a good ethical choice, with the best intentions, but then punish you in the more abstract gameplay sense for following your heart? Making you feel like there’s only one ‘right’ way to play the game, and you, pal, just screwed it up?

The flip-side of failure

I would say no. This is brilliant, and more games should be doing it. This is the part where I test out a new theory:

Just like anything else, if you play enough games you become habituated to the challenge-reward cycle. Repeating the same cycle inculcates that way of thinking into the player. We hear a bell, we salivate. The result of this is a certain deadening of our responses to the actual bookending cutscenes, level end screens, or similar between levels – between instances of the game cycle. Because we have been taught what comes next, and there is a degree of craving or of habituation about progressing into the next level, we don’t want to watch a cutscene, wait for a lengthy level-end score or loading screen. In other words, in games, success – passing the level, beating the boss, progressing – does not teach us to enjoy the moment, but rather teaches us impatience for the next upping of the game cycle’s difficulty and complexity.

Now, this is great for producing captivating, addictive, entrancing game systems – but it makes for a lousy way to tell story. Story is inconsistent, we don’t know what cutscene or story element we’re going to get at the end of a gameplay segment – all we know is, it is delaying us while we wait for the next piece of progression.

Failure is not part of the fundamental game cycle

Failures are an unavoidable part of game difficulty. Obviously, if you can’t fail in some way, the challenges aren’t challenging. But more or less uniformly, failures are simply reset points from which we can continue (or restart) a section of gameplay. They are not inherently important to the game cycle itself.

But a moment of failure is actually a great moment to deliver story – for precisely this reason. Because failure is not part of the expected challenge-reward cycle, the player does not have anywhere to go. He knows he is at a moment of reset, restart or even of permanent loss (e.g. of loyalty). Because of this, the habitual, learned “continue the progression” impulses are not active. What failure can be is frustrating, crushing, or humiliating. These are all great, strong emotional responses from the player. What better time to involve the player in the story when the player is already experiencing an emotional response?

Obviously, you can’t do this for all moments of failure – you can’t have unique story delivery every time you run out of health during a level. But time it well, make it significant, and the way that failure is emotional and memorable will allow you to deliver an experience to the player you otherwise could not.

I think you get the idea, and I’ve said my piece on this theory.

My conclusion would simply be, we need to explore how we can deliver less story on success, and more story on failure – and make failure more a part of our stories. Continually surprising the viewer with unexpected outcomes is a big part of how TV keeps viewers invested in the story and characters, and we need to stop thinking of games purely as a linear crescendo of difficulties and abilities, and more as a series of opportunities to create reversals, surprise the player, and do the unexpected – all of which is more interesting if it happens when the player fails.

What do you think? Is failure under-rated? Got any more examples of games which take advantage of failure to advance the story? Or perhaps some games whose story should affect the gameplay, but doesn’t?