I’m a pretty story-aware gamer, for obvious reasons. I have a pathological need to complete every dialogue tree, a determination to hear every variation on a bark, and I even take a perverse delight in spamming all the voice commands in TF2 and Left 4 Dead to any teammate who will listen – “Who’s gonna help me capture this bloody POINT?” – imagine hearing that again and again in the loud Scottish Demoman voice (and please don’t hate me).

You might note that both TF2 and Left 4 Dead (1 & 2) are multiplayer games. You would be correct. TF2 doesn’t have much story, beyond the Class videos, the emerging Announcer / Saxton Hale comics canon, and the fact that each level is effectively a mini-scenario where two groups are fighting for control – a scenario communicated through the level design and art itself. OK, when you write it all down, that does sound like quite a lot of story.

But what I’m thinking of is the more traditional, plot-based story where things happen to characters, who evolve, resulting in new things happening – all within the game. And for this, I want to look at Brink and Left 4 Dead 2.

Does story matter in a multiplayer game?

This is clearly something the designers on Brink thought about a lot. Splash Damage decided to buckle mini-cutscenes onto the beginning and ending of each multiplayer level (the whole game is multiplayer). You can play as either Resistance or Security, and each campaign has its own story – effectively another version of the enemy campaign’s story, but with its own propaganda slant on everything you’re doing. For example, when you’re Security, you’re trying to seize control of a bio-weapon from terrorists. When you’re Resistance, you’re trying to protect a valuable vaccine from seizure.

But now, the big question: does it blend? 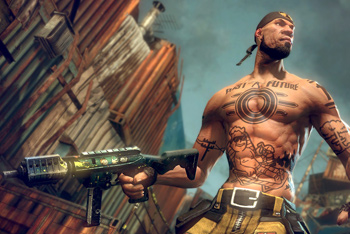 Replace ‘blend’ with ‘work’ in that sentence. Unsurprisingly, it doesn’t completely work for Brink. There are several reasons:

First, the cutscenes themselves. It’s as if Splash Damage, by hiring these incredible ethnic actors from around the world and getting their performances in all their different accents, are saying, “Look! We’re hyper-realistic and super-diverse and this story is going to be a cultural experience representative of the melting-pot life aboard the Ark!”. But then the way the characters act, and even some of the identical vocabulary used across both factions, renders this difference superficial. The characters are not clearly defined as individuals, and the emotional pitch of the story is fairly monotone. As a result, the plot is hard to follow, due to the similarity in content across all the scenes.

It also doesn’t help that, although the player characters are incredibly customizable (hair, tats, props, clothes, body type), this is in the end another superficial set of differences. All characters are men, and they all manage to look very similar — rather long-faced and mean. Yes, this art decision gives the game a distinct, recognisable look — but at the cost of distinction between characters.

“But game story isn’t told through characters!” I hear you cry, “It’s told through environments!” Well, they made a hyper-colourful world crammed with (yes) crates and high-tech stuff and machines and towers and turrets, and verily, that was good. But again, the result is an extremely messy hodgepodge, both in dramatic and artistic terms – because it turns out, if you put together every possible ethnicity, yelling and running around every possible colour of environment, crammed full with every possible prop, it’s impossible to keep focus and everything becomes a blurred mess.

Oh, monologue, how I love thee

Compare this to the Audio Logs – the one story-based feature of the game which I believe to be a great success. They are unlocked by gameplay progress (tie narrative loosely to gameplay? — check) but they are self-contained, they have structure and limits, they have distinct voices and actors who are given time to develop and play the role, and it all works tremendously well. The fact that most players won’t bother to go through the menu and listen to them is neither here nor there. They are cheap to make, they work, and they add depth to the whole world and experience. Bravo. It’s rather telling, of course, that the best story delivery in the game isn’t really part of the game itself.

The bold idea I really like in Brink is that the game’s narrative is predicated on who you believe. That is, our perspective affects what story we think we’re playing. This take on narrative gels nicely with the interactivity of games. The idea is that we experience all the confusion the fog of war creates, with propaganda vying against propaganda, our leaders telling us one thing and our enemies maintaining another. It’s also propped up by double agents with their own agendas and the soldiers’ presumed bias to begin with, and that’s why our motivations for each mission in the two campaigns are so different.

I think it’s a great idea, but there are degrees to which it simply cannot hold up. I don’t think a bio-weapon can be confused for a vaccine, or vice versa, because I don’t think it serves the powers that be to pretend a vaccine is a bio-agent if it’s not. It’s simply a waste of resources.

But more fundamental than a debate about the in-world motivations for the propaganda is my motivation to figure it out as a player.

We’ve already established that I’m a nut-job about following game stories. I’ve played through both campaigns in Brink, and that ought to qualify me to talk intelligently about how well the two variant plotlines correlate. But the truth is, the whole thing is damned confusing. I can barely follow what one of the plotlines says is happening, let alone match it up with the other.

And I want to, I’m trying to (writing down notes on what the characters say in each cutscene – you know, trying), and in theory, I’m trained in literary analysis, plus I’m a games writer.

Can you make multiplayer story important through the gameplay?

My conclusion is, if I haven’t yet succeeded in my quest to compare the plotlines, what hope is there for Derek (or was it Eric?) from Idaho, the theoretical 10-year-old against whose whims and caprices we had to weigh the story and dialogue for “Driver: San Francisco”? Not only is Derek less familiar with the tropes of games story, but far more importantly, he doesn’t care at all to begin with. The only way your typical player will care about story is if you make them care, through the gameplay.

Multiplayer is a poor venue for connecting story and individual gameplay, because there’s no spare time (due to the fact that everyone is connected and no one will wait), there can’t be a mismatch in gameplay between players (because abilities have to be balanced to keep multiplayer fair), and levels by definition have to be replayable to the nth degree, which means those (skippable) cutscenes will get old, fast, so you better keep them short – too short, in fact, to build a meaningful story.

I would love it if Splash Damage had succeeded. When they said they had a silver bullet for delivering narrative in a multiplayer game, I semi-believed them; and I certainly wanted to.

I’m all for good story in games, and more importantly I’m all for innovation in games. I think their attempt to seamlessly merge single player and multiplayer modes (which more or less failed, due to poor AI in single player, and a lack of simultaneous human opponents in the cutscene-driven campaign mode) was audacious and brought forth useful discussions. I think S.M.A.R.T. was a big success, though not as complicated or revolutionary a feature as they made it out to be.

Unfortunately, Splash Damage didn’t succeed when it came to story, and to solve a huge question like “How to do story in a multiplayer game”, I think we’ll need to do a lot more than just “improve the writing, tone down the accents, and make the characters and character art more identifiable”. Although that would be a start.

I’ve rambled on too long, so my sleuth efforts on Left 4 Dead 2 will have to wait until next time. Did you love Brink? Hate it? Say why, below; and tell me why I shouldn’t waste my time puzzling out the ‘story’ of Left 4 Dead 2. 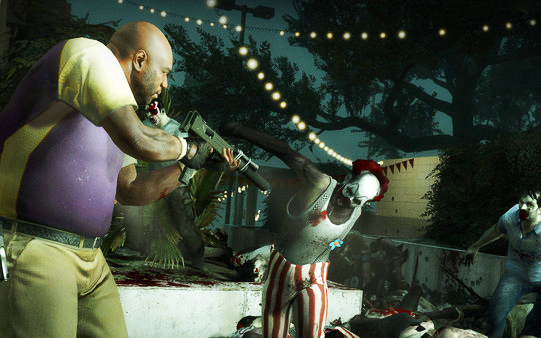