So, I attended the Eurogamer Expo again this year, and there may be a post about it in a few days. But today I want to focus on something tangentially related. At the Expo I played a level from Sonic: Generations. This is supposed to be a mesh of old and new levels from various Sonic games. Although whizzing around in a 3D environment was fun, I want to talk about when I got home and installed the classic, original Sonic the Hedgehog on my PC, thanks to SEGA’s excellent Mega Drive Classics pack on Steam (I also purchased the Sonic games separately — 1 2 3), on sale over the weekend.

Other than using an Xbox controller, it was exactly like returning to the heady days of 1991, when, aged seven, I embarked on the great Sonic adventure. One of the things I was most looking forward to was the music, which did not disappoint. Maybe one of these days I’ll post a video of my brother and I playing the Green Hill Zone theme, adapted to bass guitar and piano. Not today, though.* For now, enjoy the classic version itself in the embedded widget here:

For a change, I want to talk about the game design of Sonic. If I were to focus on the story, after all, this would be a fairly short post (though I’m sure there would be something in the thematic journey of Sonic, starting in rural idyll through to bleak space-station… but I digress).

A former colleague of mine recently quoted John Gall’s Systemantics: How Systems Really Work and How They Fail, and it’s interesting enough to repeat:

Now, I’m not going to compare Sonic the Hedgehog to the evolution of the human eye. But consider: a game now 20 years old holds up to play today, though every aspect of its technology, its budget, and its data-tonnage are vastly outstripped by current titles. Furthermore, the game is made up of such simple rules that you’d think you might even get bored during one sitting – not that you’d be picking it up again 20 years later.

But Sonic’s charm lies in the complex narrative the player constructs out of their interactions with the simple rules of the game. Oops, I said narrative — and this post is about gameplay. But really, players create stories out of every game they play — the story of how they played it. And I think Gall’s saying is applicable to the complex emergent behaviours of players interacting with a simple set of rules.

The reason Sonic is so captivating – or one of the reasons – is that the 2D side-scrolling interface is perennially effective. Although it’s largely consigned to (some extraordinary) indie games nowadays, it seems that the mechanic of running horizontally through a 2D scrolling environment will always create a stable environment for gameplay – it makes it easy to design and manage encounters that balance risk against reward and offer a clear progression. In future posts I hope to compare games like Braid, Limbo and And Yet It Moves and explore some of the modern uses of this.

But Sonic isn’t just a standard side-scroller. Other than the psychedelic backdrop, rad music, and distinctive blue hairdo, Sonic has one other key feature. 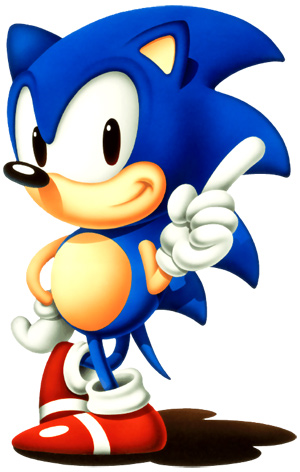 This is where my memories of playing Sonic as a kid come to the fore. Because I remember thinking and feeling that Sonic was all about the sense of speed – flowing through the environment, whizzing around loops, over hills, and flying through the sky – a blur of blue.

But looking at Sonic now, I see just how often a trap is carefully laid a few screens away from the springboard or the exciting loop, placed so that if you come flying around the next bend, you’ll land head-first on lobster claws or deadly spikes. While sometimes a extraordinary dash will see you cross the level, rampaging wildly through all in your path, more often, you’ll soon be brought up short, your collection of golden rings spilling willy-nilly across the screen as you scramble back to a more secure position.

In other words, the game maintains a constant tension between speed and safety.

Sonic is always billed as a speedy blue devil – the Roadrunner or Speedy Gonzales of videogames. But looking back at the game now, I feel that the tricksy traps in the level design make Sonic’s super-speed far less alluring, and rather more suicidal. So, is this a case of a more analytical eye examining the mechanics of something that previously went unexamined? Or have I simply grown more wary?

The perverse thing about the speed/safety issue is that you’d think this likelihood of running smack into an enemy would completely negate the speed mechanic, making players rage-quit when they realise how limited they actually are. But the possibility of making a decent run is just great enough that players persist, and it drives them to explore, play better, replay the game, try harder.

Another thing I remember is keeping the console on overnight so that I could take another crack at finishing the game the next day. The PC version of the game does away with this, not only offering you 5 save-game slots, but crucially allowing you to Quick-save with F5, and Quick-load with F9. This literally saves the state of the game in memory, down to the precise note in the background music, no matter where you are in the game. Obviously, this essentially eliminates real difficulty in the game, in that you can restore a recent good save whenever you screw up.

Yesterday I played through the whole game in maybe two hours or less, with quick-saving and quick-loading aplenty. If I had tried to do it without, the deadly Scrap Brain Zone would have done me in for sure. But then, I have (marginally) less time for Sonic than I did as a young player. I don’t think this affects the feel of the gameplay itself. It’s just a by-product of the changing technology.

Sonic 2 was the Judgment Day to Sonic’s Terminator. Sonic may be a purer experience, but Sonic 2 offers a few key features that enrichen the game. The super-sonic spin-dash (spinning in place and then whizzing off) was a brilliant addition that improved flow and reduced frustration, and the two-player race modes were a nice touch.

But the key difference was the usefulness of the Chaos Emeralds. Yesterday I rediscovered to my dismay that the emeralds collectable in Sonic the Hedgehog are purely aesthetic, resulting in an additional couple of screens during the ending. In Sonic 2, collect all 7 emeralds and you enable Super Sonic, who activates once you collect 50 rings in any level, giving you great speed and invulnerability until your rings are used up.

Purists are always likely to try to collect all the emeralds, but it’s interesting to consider that two different gameplay approaches may result in different outcomes here. A careful, slow player less prone to take risks will collect and hold onto more rings, gaining a life for every 100 rings and also increasing the likelihood of unlocking the bonus rounds that enable him to collect emeralds. Collecting all 7 will unlock Super Sonic, which will mean that – again, if you can gather the rings – this player is given greater mobility and an advantage over non-Super players when it comes to completing the game.

Conversely, players who speed through the levels will be less likely to gain emeralds, but they will accrue score (and hence lives and Continues) from time bonuses at the end of levels, enabling them to compete, provided that they have the skill and know the routes well enough to make good time without dying.

The result is a sort of basic ‘classing’ system, where less competent or less versed players can go at a slower pace in order to unlock abilities to support them further. This is effectively an early version of how I was playing Driver: San Francisco a couple of weeks ago, when I would complete all the Willpower-granting side-activities for each chapter first, in order to unlock valuable abilities that would give me an advantage in the main story.

Well… Sonic did it first.

Now, if you’ll excuse me, I have an evil Doctor to defeat.

* Side-note: another thing I learned today was that the music for Sonic was composed by Masato Nakamura, a member of the Japanese pop group Dreams Come True, which has sold over 50 million records. Clearly I’m not the only one who thinks this dude’s music is awesome.